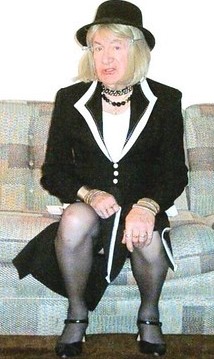 In honor of what would have been my father’s 96th birthday and transgender awareness week.

My adoptive father, Frank, was born in 1926.  The first born son of a depression-era family, he grew up to be highly responsible, emotionally unaware, and fearful of scarcity. Once my mother, Marie, died, he hoarded, buying multiple versions of the same items, stockpiling canned goods and paper products.  It’s been over 13 years since his death and only recently have I finally used the last of the plastic wrap (What?  Was I supposed to throw out perfectly good cling-wrap??)

He’d impressed me in those early post-Marie months with his resilience.  My mother had been the dominant figure, the keeper of the finances, and Frank had always seemed so easily subject to her will.  Once freed from restraint, he went on a shopping spree, bought a boat and a car, fishing gear, and a computer.  He’d even gone to the library for classes on how to email and use the Internet and had started sending me the occasional updates.

Then, on a summer Sunday in 1998, I opened one such update and gazed upon the small, blurry picture of a mini-skirted, blonde-wigged individual, attempting a seductive pose.  “I’ve always wanted to look like Marilyn Monroe, “ it read. “What do you think?”

My first thought was that it had t be some sort of joke.  Some teenaged cousin must have hacked into the account.  This was obviously a reconfigured photograph from some outside source.  MY father, my silent, 72 year old, blue-collar father, was NOT wearing a push-up bra and fuck-me heels.  I dialed the phone.  He picked up on the first ring.  “I guess you got my email.”

“What do you think?”  he asked.  I replied, as any daughter might:

In fact, Frank always did have great gams. They were slender, nicely muscled and shapely, and as a chubby teenager, I was envious of them.  I was never comfortable in short skirts and certainly could never pull off anything like the come-hither glare of that person in the photo.  Nor did that align with the man I knew as my father.  Frank was a demure figure, standing obediently holding bags in the sweltering heat of Alexander’s department store during the annual school clothes shopping ordeal.  He would smile and wave, twiddling his fingers at me, when he would come home from work.  I recall no conversation from him beyond, “how are you, little girl?”  As that little girl, I adored him, until I didn’t, which is a tale for another day.

The  final 12 years of Frank’s life were lived in large part as a woman named Cynthia Lou Ann Brown.   Those years were not unproblematic – Frank was an alcoholic and a cancer-survivor and never particularly aware of the emotional lives of those around him.  He was never cruel or cold; he never demanded excellence or affection or anything much really.  Mostly he was oblivious in a wide-eyed sort of way.  And so was she.  Cindy.  My dad.

Maybe that was a way of dealing with the suffering especially once he stopped drinking: the grief of losing the wife he loved despite the harsh realities of their marriage;  the rejection of his brothers – not because of his transgenderism as it happens, rather one of  the aforementioned harsh realities of his life with Marie.  And then, the Big One.  What kind of existential pain is it to question something so integral as your gender?  I’ve dealt with plenty of existential crises in my day, clinical and post-partum depression, trauma et alia, but I’m a girl and a girl I’ll always be.  It never enters my consciousness. It simply is.   What does that do to you when it simply isn’t?  Moreover, when it isn’t AND it’s 1944 and World War II is pulling all members of the greatest generation into its maw?  That he drank, and drank heavily, is no longer a mystery for me, nor are the difficulties of his marital relationship.  His ability to transcend all of that and live as he wanted, as she wanted, is more intriguing.  Frank was not a brave man, but Cindy, she was flamboyant and talkative and social.  What power it gave to that soul to live in the way it was meant to live.  To sing its unique song as both Frank and Cindy.  She hit upon it without ever hearing about “alignment” or “living authentically.”  She just lived.

When my father died, we gave him a small memorial service.  It wasn’t what his girlfriend wanted nor his sister, but once it was over, to me, it seemed perfect.  One of his friends, an AA buddy named Banjo Jack, whipped out his guitar, strummed its raucously untuned strings and led the small group in Amazing Grace.  The lost soul that was Frank found its home in Cindy.  My father was free.